After playing this game for atleast a month, I am rather bored and unentertained with the game.  Whereas the gameplay is very well polished, the online gameplay is flawed.  Frankly, there are too many people who try to obtain the best win ratio through many devious and cowardly deeds.  Although this is most common in numerous fighting games, one cannot escape those conveniently induced lag-spikes or have the opponent purposely lose connection (resulting in a draw for online purposes).  On the other hand, there are plenty of good-elite online players who play purely for fun or competition.  One just has to suffer a few hold-up matches until the SC4 server actually finds a good opponent by random (it doesn’t take that long).

For the most part, stick to playing with your friends locally for good time fun, and use online play for laughs (colonel sanders custom creation).

The game will certainly praise your gaming collection, but the replayability is rather limited.  At most, SC4 probably has the shelf life of possibly a month to a few months for the truly dedicated.  Nonetheless, I would have to say that this is probably the best Soul Calibur game I have played as of yet.  Think of SC3 without all the fluff and that is exactly what SC4 is, except with online capabilities.

Overall – 8.5
Rent the game first, before buying it.

Besides the addition of Yoda and Darth Vador along with the secret apprentice, Soul Calibur 4 surprisingly has some characters designed by well known manga-kas and anime designers

Designed by Mine Yoshizaki, the manga-ka who is most commonly known for the anime series “Sergeant Frog”.  Also more interesting is the fact that the character seems to be modeled after Angol Mois from the same series.

Designed by the manga-ka Oh! great, who started the series Tenjou Tenge and Air Gear.  Strangely enough, this is the one of the first times I have seen Oh! great create a character that looks like a gothic loli doll without the huge breasts. 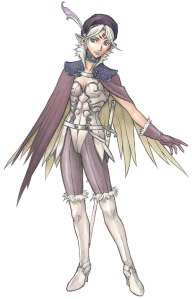 Designed by Yutaka Izubuchi, the person who created and directed the anime series “RahXephon”.  There is nothing much to say, besides the fact that his character designs are quite close to looking like a real human being rather than anime-esque.

Designed by HIroya Oku, famously known for his works like Gantz and HEN.  Character definitely gives off a sinister vibe from Gantz.

So far, the game has 33 confirmed characters.  Hopefully there will be more surprises to come, since this game will surely be a flagship for both PS3 and 360.

Designed by another manga-ka, name unknown as of now.  So far, she looks like a seigfried clone but with a summoner costume.

Knowing the nature and grandiosity of this game, be sure to invest in Capcom stock along with microsoft and sony stock. 😛